Ambassadors Football began Community Football Outreach for children in Vauxhall, London in 2009 in partnership with Christ Church London. A few coaches & volunteers turned up at a tarmac school football pitch in Kennington, but at first no children were in sight.

A few children eventually walked past and were asked to join in. One of these children was called Jason. The following week he turned up with five friends.  Five versus five became seven against seven until the project grew to have around 40-50 children involved each week. London City Mission began to partner with the project, making visits to the footballers’ families.

10 years later and the project has grown as they have a session for 6-15 year olds followed by a session for 16+. The building of relationships has provided opportunities for the church to share their faith and invite people to the other church activities. Jason is still involved and has been a regular every week. Initially he was hard to control, challenging every decision made but through the support of coaches has developed a positive attitude and now volunteers every week for the younger children.

Hope Church Vauxhall that is now leading the project with their own volunteers still seeing around 50 attend each week and has had a a few families start attending church on the Sunday.

“Goals to Glory has shown us how simple and effective football is to reach youth in our community and has given us opportunities to share the Gospel with them and deepen relationships with both young people and their families.” Kevin Croft, London City Mission & Hope Church Vauxhall Elder. 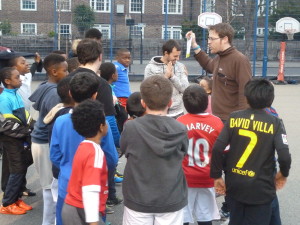