Hello from ambassadors in Kenya!

Do you believe that changed lives change communities? We do! It’s at the core of our longing to bring real hope to children in Kenya through trained individuals using quality materials in their local communities. Today we want to highlight one story from our staff team -of how God took hold of her life at one of our training courses and how her changed life is impacting those around her. Enjoy this short video …

We see from Mary’s story that transformation starts with an encounter with God, which leads to a restored relationship with Him and with self. It is our hope that this internal renewal leads to an outward expression of love and service in the community. We are seeing this in Mary’s life as she is now involved as a mentor with other female coaches in our network, coaching boys and girls at our Club at West Nairobi School, and working with girls in her local community. Would you take a moment and pray for Coach Mary and the other female coaches that are on this journey of faith and coaching?

And would you take a moment and pray for two upcoming trainings that we are organising? This Saturday we are at CITAM BuruBuru for a one-day workshop doing a refresher with coaches within our network, and next week we are running our first in-person TREC coaching course at Nairobi Chapel in almost two years. Would you pray for the coaches who are attending and for us as tutors who will be leading the courses? Please pray that lives would be changed as we consider what it means to be a coach that loves their players with a love like Jesus. 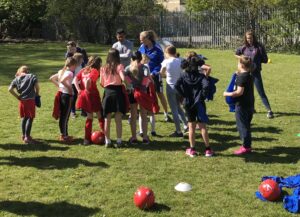 After having 10 girls attend a Holiday Camp at Easter, Ambassadors GB decided to set up a new girls football group in Lancaster. The group was a huge success and 12 girls have been attending regularly. The GOALS programme is used to share about the morals and values that are important to us as Christians. Lessons include learning about resilience, patience, focus, self-control and friendship. We use bible verses and examples to link the morals with football and our own lives. The club is now being run at the local primary school, which has resulted in a really positive relationship between Ambassadors and staff there. It is great to see the girls playing, laughing and enjoying themselves even when it gets colder and darker.

In September, interest started developing for a second girls group in Morecambe and so we decided to see to push the door and see if many came along. This group quickly had a positive uptake, with 6 girls coming along and more expressing an interest for after Christmas.

At the beginning of each session, we let the girls have a ball each to run around with. They are encouraged to take shots and tackle each other as well as dribbling and keeping good control of the ball. In April, one girl would gently dribble around and not let anyone go near her. Now she is getting much more stuck in and in the matches she goes in for tackles, moving towards the action rather than away from it. Although a small step, we believe this progress is hugely significant! She has really grown in confidence in her own ability and last week got Player of the Week for the first time.

In both groups, we have seen the confidence in the girls increase. The skills (even on a slope in the school and in a village hall with very fast floors) are improving and we have spoken a lot about focus and control – in life, in football and as Christians.

After a year’s hiatus, Ambassadors GB were back this weekend hosting the London Churches Football Tournament at new venue – Kings House Sport Ground. Teams began arriving from 9:00 on Saturday morning and before long the field was packed full of men, women and children all ready to compete. There was a buzz in the air as people greeted teammates, old friends and rivals. In total there were 47 teams representing 37 churches spread through our four categories: Walking Football, Men’s, Women’s and Kids’. 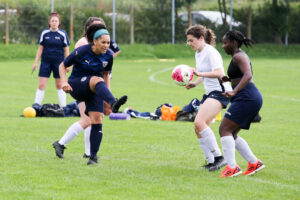 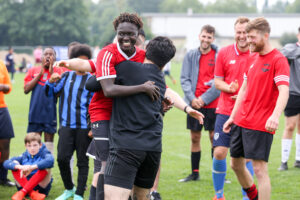 The competitions were soon underway and a variety of exciting matches ensued. Many fans had come to support their friends and churches and they certainly had a variety of games to keep them entertained! Some people had been coming to LCFT for years where for others it was their first time. A few people explained that their team had formed within the past month for the tournament, whereas others seemed to train more regularly. The Walking Football competition was particularly fun to watch, as I had never seen it in action before. Lots of people were trying it for the first time and said they were building their confidence to return into sport.

After a morning of playing, we stopped for lunch and Sam Gibb from Hope Church Vauxhall stepped up to share a message from the Bible. He spoke excellently and the rowdiness of the football pitches quickly disapparated into a captivated silence. Many attendees had been brought along by friends from the church and so for lots of people, it was their first time hearing a gospel message! 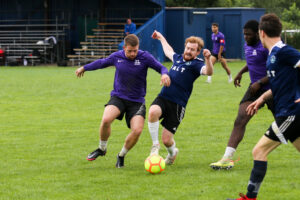 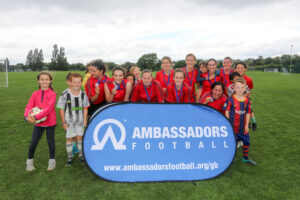 After lunch, the tournament resumed and the knock out stages progressed into gripping finals. Fulham for TURC snatched the victory for the Walking Football tournament, then Impact FC for Women’s, XLP for the Men’s cup, C.C East Greenwich for the Men’s plate, St Mike’s Youth for U14s and Los Campos FC for U12s. Teams proudly received their medals and we awarded trophies for sportsmanship amongst other things. There was a great attitude throughout the day and we got by without any major hitches or injuries. Despite a short downpour, spirits remained high and the sun soon dried us all out again straight after!</p

We want to say a huge thank you to all who attended, especially to those who volunteered and helped with refereeing, taking photos, score keeping and more. We praise God for his provision and safety throughout and will be praying for changed lives as a result of people hearing and receiving His amazing message of salvation.

Looking forward to seeing you all next year! 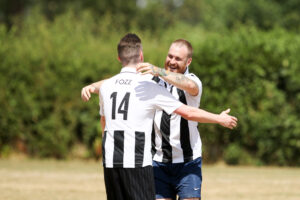 John Hope Barry became a Christian after attending church meetings in his local community centre. He quickly developed a passion for reaching the lost people on his estate and decided that the best way to go about this was by starting a football team. And so, in partnership with his local church, Oldhams’ Disciples FC was born.

“The church really embraced the idea and became the biggest supporters,” John said, “The team is a friendly environment where all feel welcome.”

The Oldhams’ Disciples FC came to Ambassadors’ National Christian Football Festival (NCFF) for the first time in July 2019. The NCFF is a tournament that lasts two days and is packed full of matches and other social activities.The Disciples lost every game and by the end of the weekend had only scored 1 goal and had 9 fit players left. Despite this they continued till the end, playing with passion and enjoying their time with the other 13 teams.

“It was a such a good opportunity to go away with the men” John said “they often don’t get a chance to get out of our estate, never mind Bolton.”

The sportsmanship award is the biggest trophy of the weekend, given to the one player that impresses the referees and organisers by the way they act on and off the field. In 2019, for the first time, it was presented to the whole Oldhams’ Disciples team.Oldhams’ Disciples were the first team to register for NCFF 2020.Ambassadors Football loves to support teams through the tournaments we run. They are always a catalyst for the support we give during the year and over 70 teams like Oldhams’ Disciples register for both the NCFF and London Churches Football Tournament.

NCFF is running from 17-18th of July. If you’d like to field a team or are interested in being put in one, please check out our tournaments page HERE.