In August 1990, 3 overseas amateur footballers who had relocated to the northern England town of Bolton decided to start a football team by placing an advert in a local newspaper. From these humble beginnings, a movement started that was called ‘Ambassadors in Sport’ which eventually became known as ‘Ambassadors Football’ from August 2013. This movement has grown both nationally across the UK, and internationally to over 25 countries globally. The ambitions of these founders of the Ambassadors football club have always extended beyond the field itself; their Christian faith, ethos and values drove them to go beyond the game and actually seek to bring transformation both to individuals and communities through the combination of Football, Faith, Future.

Since becoming a UK registered charity and a limited company in 1997; Ambassadors have aspired to run quality football outreach for the local church in an aim to share faith, to give individuals a better future. From our experience we have invested in churches and individuals to empower and train them. We believe football is a great way to build fellowship, friendship and trust that breaks down all barriers.

In the UK, by 2027 we will partner with 800 churches in their disciple-making mission (we current partner with approx. 434).

We will train 100 people through football to be effective Christ-followers. 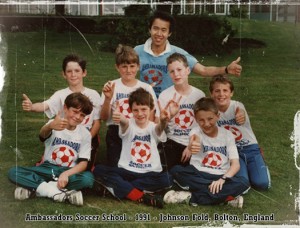